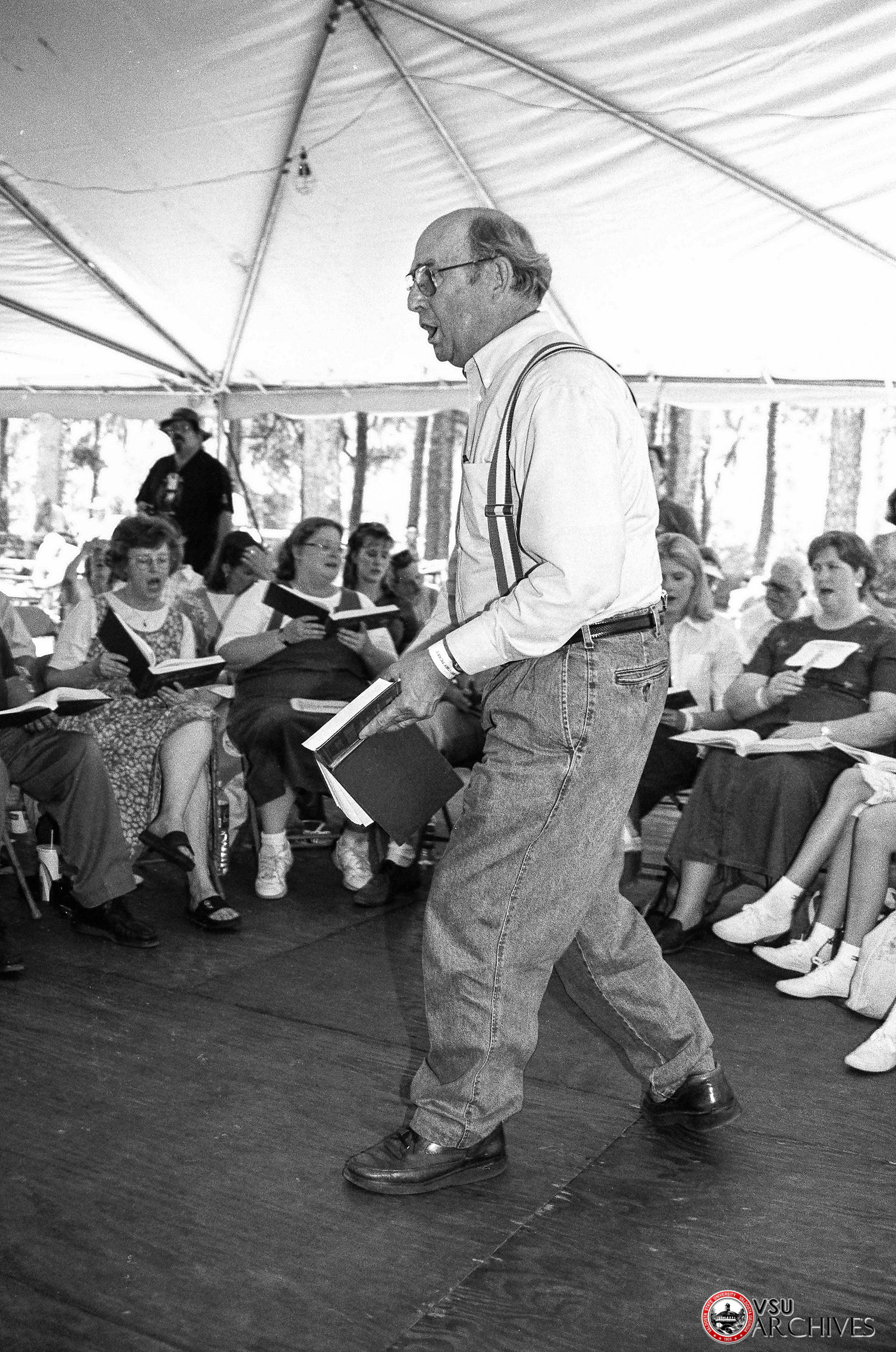 content_summary: Tape 1 begins with short discussion of and demonstration of hollering for the Wiregrass Ways hollering radio program, at his home in Callahan, FL. Majority of tape is a recording of the Sacred harp hymn sing at Nathalene Primitive Baptist Church.

notes: Unlike Hoboken monthly sings, this is held the old style where there is one song leader, in this case Phillip Reeves, David Lee's first cousin on his mother's side. Phillip walks time throughout, as was typical of Hoboken before the recent changes.

technical_summary: A lot of resonance in this room- all pine floors and walls. Home of Tollie and Ramona Lee, Callahan, FL

content_summary: Tollie discusses Primitive Baptist tradition in the Crawfordite and Bennettite traditions as background for a planned radio piece on Big Meeting recorded at Rome Primitive Baptist Church in Dixie Union outside Waycross in fall of 2004. Tollie lined hymns and was one of the elders who preached. Tape recording of just over an hour covers earliest memories of Big or Annual Meetings, stories about Big Meeting he was told (preacher and the bull), terminology for Big Meeting, Annual Meeting, Yearly Meeting, descriptions of what goes on in annual meetings (Sat vs. Sunday, time of the year, communion and foot washing, right hand of fellowship), hymn lining, Frank Lee and Elton Dowling as superb liners of the past, how Tollie joined the church, preaching style.

notes: Tollie Lee is a very personable individual, a singer of sacred harp in the style of the Okefenokee region, an Elder in the Primitive Baptist Church (he leads services at the Piney Grove Church near Ruskin east of Waycross, Sardis near Folkston, and his home church of Nathalene, near Hilliard, FL), and a fine leader of Primitive Baptist hymns. He also reportedly can play some harmonica and knows some of the secular as well as sacred tunes recorded by Francis Harper (collector of Okefenokee lore) in his 1940's sessions. Tollie grew up hearing and singing sacred harp in the regional style which is very influenced by the acapella Primitive Baptist hymn singing tradition. His father, Silas Lee (who passed away in June of 1997 at the age of 86) was the singing school teacher and song leader for many years. His maternal grandfather, Martin E. Dowling, and great grandfather, Lazarus Dowling, were both song leaders and singing school teachers. Tollie recalls his father would hold singing schools on Sat. and Sunday, one weekend per month, for six months, attracting some 100-250 people. Tollie and his wife Ramona, along with daughter Amy, now attend the Hoboken sings which have been revived by David and Clarke Lee the Sat. before the third Sun. each month in the Hoboken School. Some of Tollie's siblings and their families attend as well. In addition, Tollie attends a monthly sing near his home in rural Nassau County in a special building used for sings at Dane Conner's home, off US 1 north of Hilliard. This is held the Saturday before the first Sunday (the same weekend that Tollie holds services at the Nathalene church). The sings are reportedly more traditional' than the ones at Hoboken in that a single song leader presides and walks time for every song. The group is also smaller. Although Tollie grew up with sacred harp, he did not grow up in the Primitive Baptist Church. He 'went to church', but as a boy he recalls that more often than not he played outside rather than go inside to worship. His parents did not join the church until Silas, Tollie's father, was 42 years of age. Thus Tollie was 'less sheltered' (in his words) than families such as that of David Lee (a cousin) since Tollie listened to the radio occasionally and went to picture shows. He played harmonica in a talent contest and grew up with sacred and secular musical influences. His mother Elvira showed him how to play harmonica. Tollie joined the church when he was 28 (1970). He was licensed as an elder in May of 1972 and ordained in Jan. of 1973. He had never lined a hymn before he was first licensed to preach. The first hymns he 'gave out' were #120 in the Lloyd's Hymnal, and then #167. He describes his lining and his musical way of 'deliverance' in his sermons and prayers as a gift that comes from the Lord. I recorded a service at the Sardis Church, as well as the hymn sing after church. The service recording is not submitted with project materials at this time due to concern on the part of some deacons of the church. Tollie himself does not mind if others hear his gift. He has a very good voice and is open minded about outsiders coming and recording his services, something that is not the case with many other elders in the region. I was directed to Tollie by John Crowley, asst. prof of history at VSU, who completed his dissertation at FSU on the history of Primitive Baptists in S. GA and N. FL."