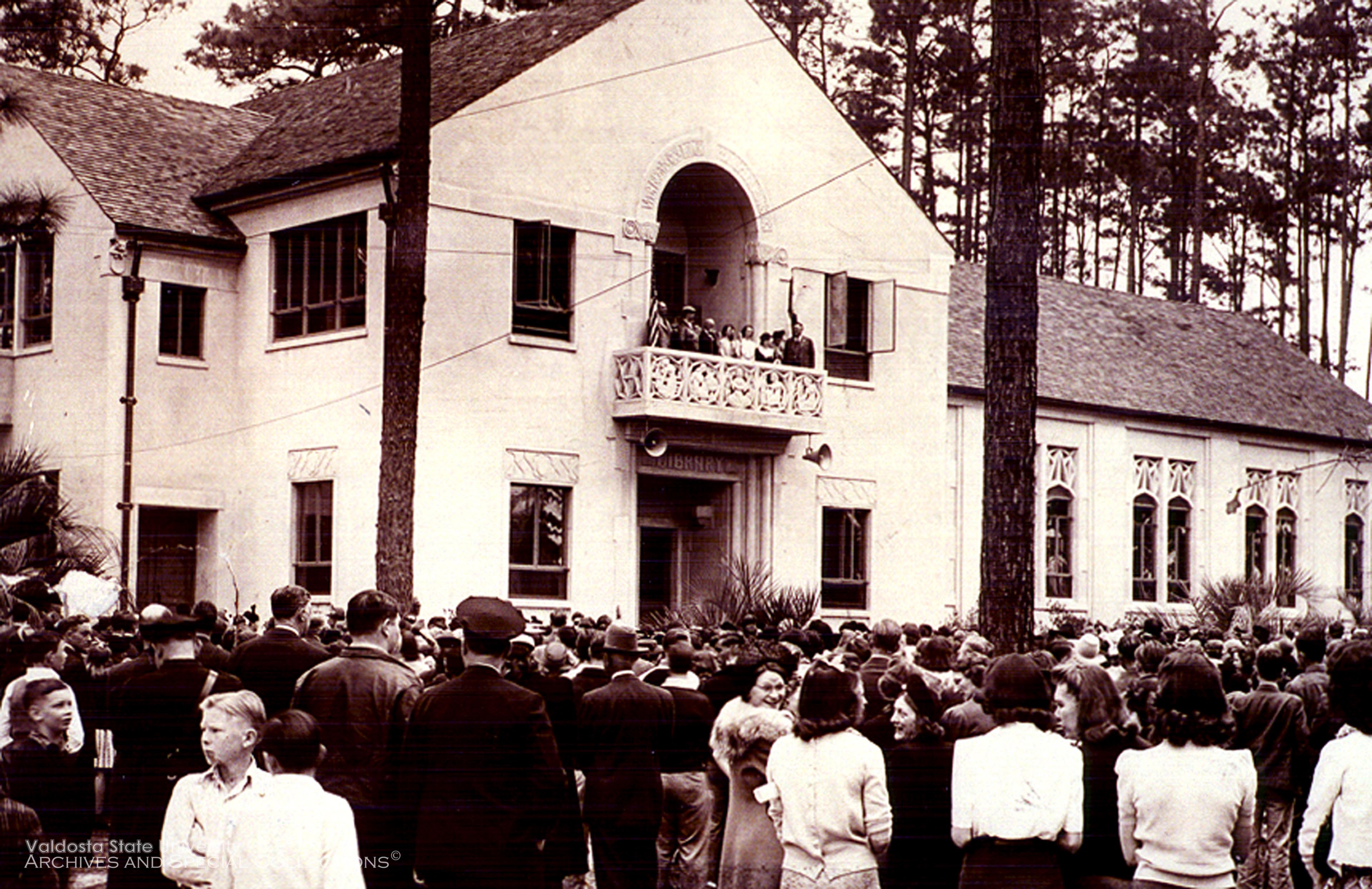 1. Roosevelt-eleanor_library-dedication_19410327.tif: 5x7 B/W/ photograph of Powell Hall library dedication with dignitaries on the 2nd floor balcony and numerous students gathered on the lawn attached to poster paper for display. Eleanor Roosvelt dedication, March 27, 1941. Caption: 1941 opened peacefully for GSWC. The last and most impressive WPA project, the Library, was dedicated in Spring of 1941. Eleanor Roosevelt, first lady and a family friend of the Reade’s, came down to dedicate the library, later named Powell Hall. Mrs. Roosevelt foreshadowed the war to come when she warned in her dedication: “Your day offers the problem of whether a rule of force shall dominate the world or shall a rule of reason. . .prevail”

4. roosevelt-eleanor_martin-sara_19410327: Mrs. Roosevelt and Sara Catherine Martin, President of SGA, 1942-1943. "I think the building of a War Bond Scholarship at the Georgia State Womans College is a grand idea, and your committee is certainly to be congratulated on the fine work it is doing in this worthwhile activity. I wish you every success." (The Students of GSWC Announce...Pamphlet, 1942.) This image was taken in March 1941, when Mrs. Roosevelt dedicated the Library.

Description: Recording and Transcription Notes: The compact disc and transcription which are included in this volume were made from one of two copies of an original record made using an RCA Victor record making machine ordered by Dr. Reade from a company in Jacksonville, Florida especially to record Mrs. Eleanor Roosevelt's appearance as guest speaker at the dedication of the new library at Georgia State Womans College at Valdosta, Georgia on March 27, 1941. This compact disc is a digital recording made from one of the 78 rpm copies which is held at the Lowndes County Historical Society. The second copy is housed in the archives of Valdosta State University. The 78 rpm record reflects the less than perfect conditions under which the original recording was made, the early stage of the evolution of the recording process itself, the fact that it is a copy of an original, and sixty-six years of use. The original is presumed to be lost. Unaided by modem editing software, this copy evidences reverberation and high hiss levels which make the voices difficult to understand. The three speakers' voices have been electronically processed using different filters chosen to bring out the frequencies of each particular one and therefore make it clearer and more easily understood. Although much of the hiss is removed, unfortunately, the reverberation remains and understanding the words of each speaker requires some effort. Mrs. Roosevelt's voice is the most easily understood. Evidently a few of her words were missed when side 1 was full and the disk was turned over and the cutting stylus set on the opposite side of the record. In addition, some of her concluding remarks were lost when space was exhausted on side 2. The recording is 9 minutes and 15 seconds.