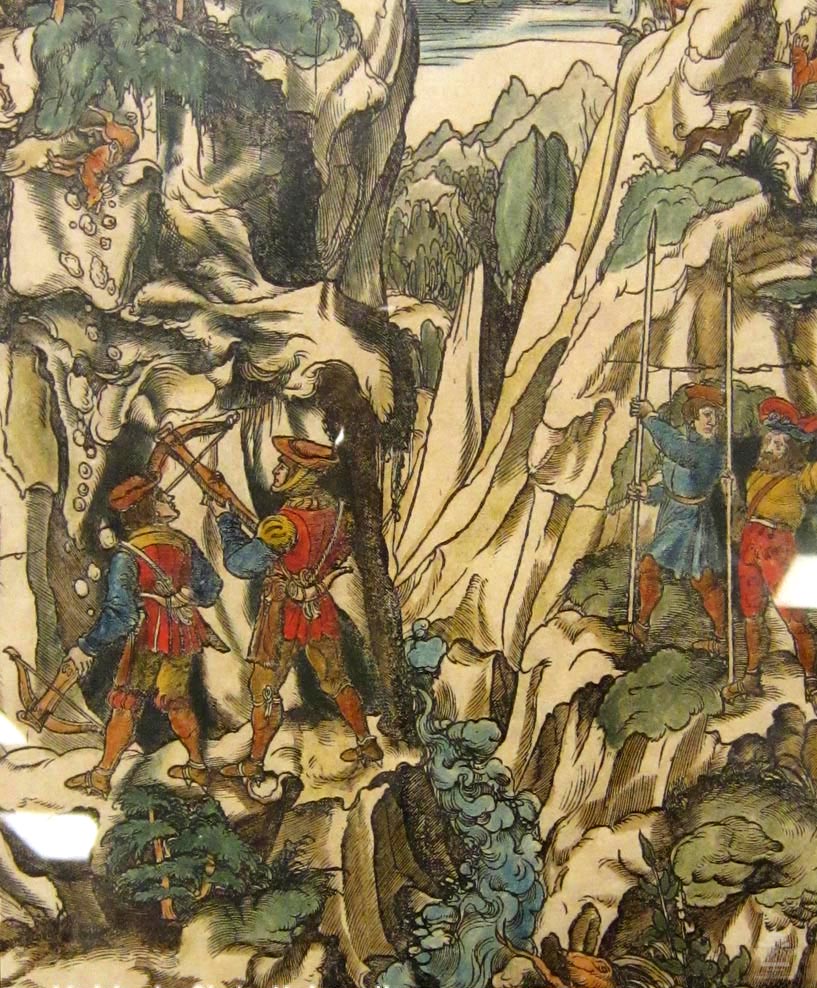 "The White King." Framed medieval woodcut, hand colored. Showing hunters with crossbows and supporting serfs with spears. 8 5/8" x 7 3/4". Produced: Hans Burgkmair. The Weiss Kunig was one of three books commissioned by Emperor Maximillian I (1459-1519). The book chronicles Maximillian’s life and represents his court as an ideal chivalric society. Maximillian is unusual in adopting the woodcut as the medium for large –scale schemes of patronage. Woodcut was cheap and therefore less prestigious than painting or tapestry, but Maximillian was short of money and woodcut also had an advantage of allowing multiple copies to be made for distribution around members of his court. The Weiss Kunig linked Maximillian to prophecies foretelling the coming of a Friedenskaiser (Emperor of Peace). In this image we see a hunt. The Weis Kunig remained unfinished at Maximillian’s death, but proofs survive. There were 236 illustrations planned, with painter Hans Burgkmair, (1473-1531), Maximillian’s chief designer from 1508, designing about half of them. The blocks were cut by Jost de Negker and a team of assistants between 1514-1516. Large-scale projects like these helped to raise the status of block cutters. Documents survive showing that Jost de Negker was effectively publisher in overall charge and his assistants were paid an annual salary which worked out six times more for each block than that paid to the designers for each drawing. Caption taken from V & A Images: http://collections.vam.ac.uk/item/O820825/der-weiss-kunig-the-white-print-burgkmair-hans/